The Crystalline State of Water

Every now and then we come across a new idea whose time has come that fundamentally changes the way we see ourselves and our world. 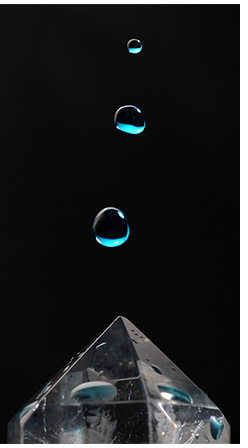 Such is the case of the work of Dr. Gerald Pollack of the University of Washington whose research sheds light on the crystalline state of water. That is, he shows how water exhibits a fourth state (beyond solid, liquid, or gaseous states) that is crystalline!

The concept of crystalline water existed for almost 100 years, yet the prevailing view remained that water exists only as a solid, liquid, or gas. In his lecture to the university faculty (video below: Water, Energy, and Life: Fresh Views From the Water’s Edge), Dr. Pollack elegantly elucidates his research on water’s crystalline state.

Dr. Pollack’s research indicates when water is in its crystalline state, it exhibits properties unlike any other state of water. These properties include: 1) molecules more constrained and stable, 2) negative charge, 3) absorbs light at 270 nm, 4) increased viscosity, and 5) molecular alignment.

Dr. Pollack also shows when water is put into contact with hydrophilic (i.e., “water loving”) substances such as proteins and nafion (synthetic material used for research), an exclusion zone (EZ) develops wherein crystalline water forms at the surface of the material.

This exclusion zone often extends many millions of molecular layers into the liquid and is negatively charged. The water beyond the end of the zone is positively charged. This means a battery is formed!

For a battery to form, energy must be put into the system. Dr. Pollack discovered this energy comes from electromagnetic radiation. Near Infrared radiation (around 3 microns) is much more effective than any other part of the electromagnetic spectrum.

Humans are composed of proteins (and other hydrophilic substances), and are 60% water by weight and 99% water by total number of molecules. The implication here is that we can capture the energy of radiation that is constantly impinging upon us and make millions of batteries in our body that could give us energy to carry out our life processes! In this way, we are similar to plants, which use water and sunlight in the process of photosynthesis.

Wow! This makes me want to go take a sunbath or an infrared sauna.

One of the most significant developments for nutrient uptake and assimilation is the advent of liposomal delivery systems.…
Read More
0
0
0
The Orthomolecular Medicine News Service (OMNS) published on June 12 “The Need for Iodine Supplementation.” We believe strongly…
Read More
1
0
0
In Part One of this article, I introduced the work of Dr. Benjamin S. Frank. Specifically, I presented…
Read More
0
0
0
We live in a digital world enjoying convenient and limitless access to people, information, and the Internet of…
Read More
0
0
0
In early 2012 a friend of mine told me about a new product he was taking from a…
Read More
0
0
0
When I first learned about Nrf2 activators in early 2012, I became quite enthusiastic about new knowledge that…
Read More
0
0
0