Ultimate Protector contains broccoli and broccoli sprouts powder, as well as components from 29 different fruits, vegetables, and herbs. Each of these ingredients contain substances that may be considered to be polyphenols, antioxidants, and Nrf2 activators. In this article, I will explore the ingredient “broccoli and broccoli sprouts powder,” which is a component of VitaVeggie from Futureceuticals.

In 1992 a team of Johns Hopkins University scientists isolated a cancer-fighting phytochemical in broccoli called glucoraphanin, which is the glucosinolate precursor of sulforaphane.

When chewed, broccoli releases glucoraphanin and myrosinase, an enzyme found in another part of the plant cell, which work together to produce sulforaphane, which in turn activates a transcription factor (Nrf2) in the cell. After activation, Nrf2 then translocates to the nucleus of the cell, where it aligns itself with the antioxidant response element (ARE) in the promoter region of target genes.

The target genes are associated with processes which assist in regulating cellular defenses. Such cytoprotective genes include that for glutathione. Around 200 genes have been well-characterized, and as many as 1700 may be related to this aspect of cellular defense. The 1992 study was followed by the discovery in 1997 that glucoraphanin is found in higher concentrations in three- to four-day-old broccoli sprouts, at least 20 times the concentration of full-grown broccoli.

STUDIES DEMONSTRATING THE BENEFITS OF BROCCOLI AND BROCCOLI SPROUTS

Many studies have supported the protective effects of broccoli and broccoli sprouts against cancer. The chemopreventive properties of sulforaphane, which is derived from the principal glucosinolate of broccoli and broccoli sprouts, have been extensively studied. Recent research into the effects of sulforaphane on cancer stem cells (CSCs) has drawn lots of interest. CSCs are suggested to be responsible for initiating and maintaining cancer, and to contribute to recurrence and drug resistance. A number of studies have indicated that sulforaphane may target CSCs in different types of cancer through modulation of NF-κB, SHH, epithelial-mesenchymal transition and Wnt/β-catenin pathways. Combination therapy with sulforaphane and chemotherapy in preclinical settings has shown promising results. In this article, we focus on the effects of sulforaphane on CSCs and self-renewal pathways, as well as giving a brief review of recent human studies using broccoli sprout preparations.

The existence of cancer stem cells (CSCs) in breast cancer has profound implications for cancer prevention. In this study, we evaluated sulforaphane, a natural compound derived from broccoli/broccoli sprouts, for its efficacy to inhibit breast CSCs and its potential mechanism.

Aldefluor assay and mammosphere formation assay were used to evaluate the effect of sulforaphane on breast CSCs in vitro. A nonobese diabetic/severe combined immunodeficient xenograft model was used to determine whether sulforaphane could target breast CSCs in vivo, as assessed by Aldefluor assay, and tumor growth upon cell reimplantation in secondary mice. The potential mechanism was investigated using Western blotting analysis and beta-catenin reporter assay.

Sulforaphane inhibits breast CSCs and downregulates the Wnt/beta-catenin self-renewal pathway. These findings support the use of sulforaphane for the chemoprevention of breast cancer stem cells and warrant further clinical evaluation.

The isothiocyanate sulforaphane [SF; 1-isothiocyanato-4(R)-methylsulfinylbutane] is abundant in broccoli sprouts in the form of its glucosinolate precursor (glucoraphanin). SF is powerfully bactericidal against Helicobacter pylori infections, which are strongly associated with the worldwide pandemic of gastric cancer. Oral treatment with SF-rich broccoli sprouts of C57BL/6 female mice infected with H. pylori Sydney strain 1 and maintained on a high-salt (7.5% NaCl) diet reduced gastric bacterial colonization, attenuated mucosal expression of tumor necrosis factor-alpha and interleukin-1beta, mitigated corpus inflammation, and prevented expression of high salt-induced gastric corpus atrophy. This therapeutic effect was not observed in mice in which the nrf2 gene was deleted, strongly implicating the important role of Nrf2-dependent antioxidant and anti-inflammatory proteins in SF-dependent protection. Forty-eight H. pylori-infected patients were randomly assigned to feeding of broccoli sprouts (70 g/d; containing 420 micromol of SF precursor) for 8 weeks or to consumption of an equal weight of alfalfa sprouts (not containing SF) as placebo. Intervention with broccoli sprouts, but not with placebo, decreased the levels of urease measured by the urea breath test and H. pylori stool antigen (both biomarkers of H. pylori colonization) and serum pepsinogens I and II (biomarkers of gastric inflammation). Values recovered to their original levels 2 months after treatment was discontinued. Daily intake of sulforaphane-rich broccoli sprouts for 2 months reduces H. pylori colonization in mice and improves the sequelae of infection in infected mice and in humans. This treatment seems to enhance chemoprotection of the gastric mucosa against H. pylori-induced oxidative stress.

Sulforaphane absorption and excretion following ingestion of a semi-purified broccoli powder rich in glucoraphanin and broccoli sprouts in healthy men.

Sulforaphane (SF) is a chemopreventive isothiocyanate (ITC) derived from the myrosinase-catalyzed hydrolysis of glucoraphanin, a thioglucoside present in broccoli. Broccoli supplements often contain glucoraphanin but lack myrosinase, putting in question their ability to provide dietary SF. This study compared the relative absorption of SF from air-dried broccoli sprouts rich in myrosinase and a glucoraphanin-rich broccoli powder lacking myrosinase, individually and in combination. Subjects (n=4) each consumed 4 meals consisting of dry cereal and yogurt with 2 g sprouts, 2 g powder, both, or neither. Blood and urine were analyzed for SF metabolites. The 24 h urinary SF recovery was 74%, 49%, and 19% of the dose ingested from broccoli sprouts, combination, and broccoli powder meals, respectively. Urinary and plasma ITC appearance was delayed from the broccoli powder compared to the sprouts and combination. A liver function panel indicated no toxicity from any treatment at 24 h. These data indicate a delayed appearance in plasma and urine of SF from the broccoli powder relative to SF from myrosinase-rich sprouts. Combining broccoli sprouts with the broccoli powder enhanced SF absorption from broccoli powder, offering the potential for development of foods that modify the health impact of broccoli products.

One of several challenges in design of clinical chemoprevention trials is the selection of the dose, formulation and dose schedule of the intervention agent. Therefore, a cross-over clinical trial was undertaken to compare the bioavailability and tolerability of sulforaphane from two of broccoli sprout-derived beverages: one glucoraphanin-rich (GRR) and the other sulforaphane-rich (SFR). Sulforaphane was generated from glucoraphanin contained in GRR by gut microflora or formed by treatment of GRR with myrosinase from daikon (Raphanus sativus) sprouts to provide SFR. Fifty healthy, eligible participants were requested to refrain from crucifer consumption and randomized into two treatment arms. The study design was as follows: 5-day run-in period, 7-day administration of beverages, 5-day washout period, and 7-day administration of the opposite intervention. Isotope dilution mass spectrometry was used to measure levels of glucoraphanin, sulforaphane and sulforaphane thiol conjugates in urine samples collected daily throughout the study. Bioavailability, as measured by urinary excretion of sulforaphane and its metabolites (in approximately 12 hour collections after dosing), was substantially greater with the SFR (mean = 70%) than with GRR (mean = 5%) beverages. Interindividual variability in excretion was considerably lower with SFR than GRR beverage. Elimination rates were considerably slower with GRR allowing for achievement of steady state dosing as opposed to bolus dosing with SFR. Optimal dosing formulations in future studies should consider blends of sulforaphane and glucoraphanin as SFR and GRR mixtures to achieve peak concentrations for activation of some targets and prolonged inhibition of others implicated in the protective actions of sulforaphane.

Continued research shows a growing list of health benefits for these nutritional substances, especially relating to Nrf2 activity and ability to provide significant chemoprevention. They add an important vegetable profile to the ingredient mix in Ultimate Protector™. 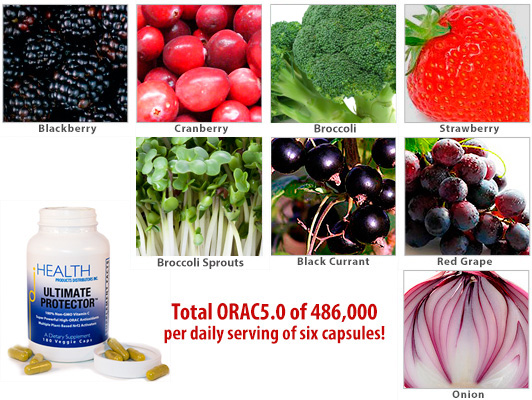 One of the most significant developments for nutrient uptake and assimilation is the advent of liposomal delivery systems.…
Read More
0
0
0
The emergence of diabetes in epidemic proportions has become one of the most weightiest (pun intended) health issues today.…
Read More
0
0
0
It has finally arrived — the exciting new Terraflora™ synbiotic. A synbiotic is a combination of probiotics and…
Read More
0
0
0
Few things in life are 100% guaranteed. This holds true for nutritional supplements, too. Yet, while olive leaf…
Read More
0
0
0
The Orthomolecular Medicine News Service (OMNS) published on June 12 “The Need for Iodine Supplementation.” We believe strongly…
Read More
1
0
0
In Part One of this article, I introduced the work of Dr. Benjamin S. Frank. Specifically, I presented…
Read More
0
0
0